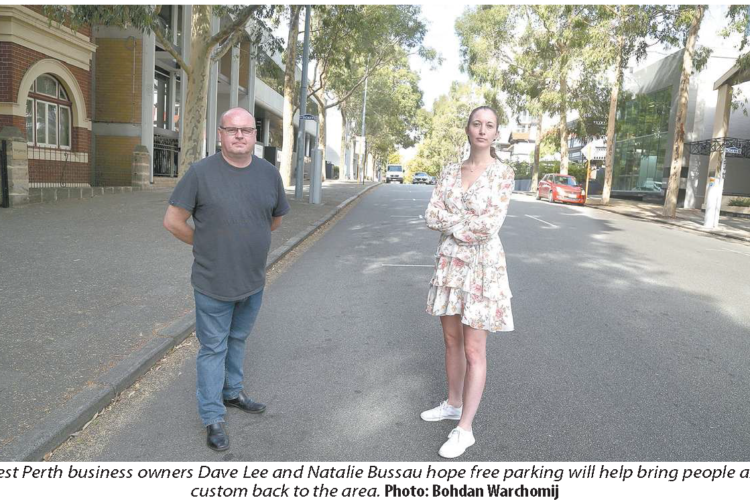 Desperate West Perth traders are crying out for more free parking to bring back visitors and customers to the struggling precinct.

Councillor Sandy Anghie told last Tuesday night’s meeting of Perth City Council that she regularly saw whole sections of Hay Street in West Perth with no cars parked in the street on Saturdays and Sundays.

“I hear continually that the cost of parking, and the time limits on street parking, is a barrier to people visiting our city … so let’s remove this barrier, ”Ms Anghie told the March 29 meeting.

She proposed a motion for free parking on Hay Street on weekends and hoped it might even encourage more businesses to open their doors at the weekend.

Local business people urged the mayor and councillors to support the idea and go even further.
Steven Wellard, president of West Perth Local, said some streets in the area still had paid parking on Saturdays, from 8am to 6pm, at a rate of $4.10 an hour.

“That’s effectively doubling the cost of a quick cup of coffee,”Mr Wellard said.

“How can we possibly compete with our neighbouring suburbs?

Dave, the owner of Theory for Hair on Hay Street, said: “I think one hour free parking is great, but it’s not generous.”

Many of his customers were uncertain about where they could park and for how long because some streets had free parking while others didn’t.

“[So] I drive their car – sometimes five, six or seven cars – and park them on Ventnor Avenue, Richardson Terrace, Cook Street, any of the side streets that are free,” he told councillors.

Three hours free parking would be generous and encourage people to come into the city instead of going to shopping centres such as Karrinyup or Claremont, he added.

“Something must give before we lose the strip completely to our growing neighbours of Subi-East, Leederville and West Leederville.”

On the other side of Thomas Street he said Subiaco offered free parking on Hay St, one hour free parking during the week and free parking after 5pm Monday to Friday and all weekend.

Mr Wellard asked the council to restrict paid parking on Saturdays to Hay Street – and not in side streets – and only between 8am and midday.

He also called for the one hour free parking scheme to be extended further west along Hay St to Thomas street.

During the subsequent debate it emerged the city had collected $59,000 from weekend parking fees in West Perth for the past eight months.

The council lost the equivalent of between four and five million dollars in fees a year through free parking schemes, the meeting heard.

Staff said there was “an enormous amount of work in this area” and that a workshop would help give councillors a “fair grounding” of the complexities involved.

After a split vote, Cr Anghie’s motion was deferred to the April 26 council meeting on the casting vote of mayor Basil Zempilas.