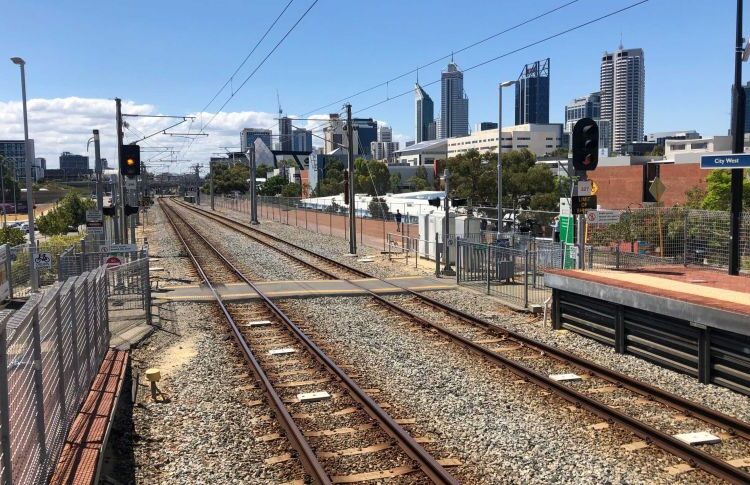 The WA Liberals have unveiled a plan to redevelop City West as part of its March election pitch, in what the party has labelled a “bold” vision to “revitalise” the CBD and triple its population.

Under the proposal, dubbed “New City West”, commercial and residential opportunities would open by sinking the railway between the Mitchell Freeway and Thomas Street.

A Liberal Kirkup government would allocate $5million to develop a “detailed masterplan” for the project but the party would not estimate the project’s total cost.

“Often this part of Perth has been the poor cousin, often overlooked, and we want to create a masterplan for this part of the city for our city’s future to make it a vibrant and more connected village.”

“We’ll do that by making a more connected community and a more liveable Perth,” Mr Kirkup said.

“We want to make sure that people come here to choose a new lifestyle with a mix of diverse housing options.”

The Liberals said the proposed redevelopment would sink 500 metres of rail, but the distance between the two roads appears to be closer to 1 kilometre.

The party would not estimate the plan’s total cost, but said working with public-private partnerships (PPP) had the potential for it to be “cost neutral”.

“There’s every prospect this is cost neutral by working to unlock this land and unlock this opportunity,” Mr Kirkup said.

“Work with private sector partners in a PPP style to unlock this land.”

The Liberals promised to deliver the project by 2029.

“They bankrupted the state nearly last time they were in government, clearly they are going to do it again if they’re re-elected.

“They are risky, they are inexperienced and they are financially irresponsible.”

Perth Lord Mayor Basil Zempilas said he welcomed “big thinking and big plans” but not at “any cost”.

“There has to be sound financial management behind it,” Mr Zempilas said.

“We would be supportive of … anything that would enhance living, working or interacting with the City of Perth, but a project of that significance and that scale, that would be a State Government
project.”

‘A bit of hustle and bustle’ welcomed by local group

West Perth Local is an organisation set up in 2017 to support business and development in the West Perth precinct, comprised of local business owners and residents.

Vice-chairperson Rachel Thomas said West Perth had been neglected in the past, but things were changing and they welcomed the focus.

“It’s obviously gone past the heyday obviously when all the mining companies were there, and it was very bustle-y. Then it’s gone quite dead,” Ms Thomas said.

“But it really feels like it really is emerging again and taken seriously.

Ms Thomas said people lived in West Perth because of its convenience to bars and restaurants in the city, Kings Park, Leederville and Subiaco, but the precinct itself was very quiet at night.

She welcomed more residential housing to bring more life to the area.

“We’re seeing that a lot now, we’re seeing a lot of older buildings being knocked down. A lot have been vacant in West Perth certainly for a long time, I’m assuming it would be a lot more residential apartments, that seems to be the way of the future,” Ms Thomas said.

“West Perth in the evening, I guess that’s one of the nice things, it is very quiet. But some people like a bit of hustle and bustle.

“Sometimes I wonder ‘where is everybody’?”

“For all the people who live in West Perth, you don’t see them out on the street a lot, so sometimes it’s just the people who work there, and then they go home.

“I think it’s a great idea to get more people to live in the city centre, that should be a major aim of both parties and 90,000 rather than 30,000 is the kind of figure I think should be on the table,” he said.

“Bringing the private sector’s ability to create urban development along with better public transport and certainly better walkability, that is the great attraction for this sort of project,” he said.
Professor Newman said he was not concerned the Opposition had only promised $5 million to the plan in its first term if were to win the election.

“This is the kind of breakthrough you need to get the business case done, to get the partnerships drawn up, you’ll find that there is enormous interest in the private sector in this sort of project,” he said.

Property analyst Gavin Hegney said while he encouraged the plan, he believed there may be “better” alternatives.

“I think sinking the train line is a good idea in its own right — if you gain or link two areas together, thatmake sense,” Mr Hegney said.

“At this stage though, the freeway also would need to be sunk to capitalise fully on that cost.”

Meanwhile, WA Labor has criticised the Liberals and Nationals over their economic credentials, stating the parties have already promised billions of dollars in unaccounted-for election promises.

“The balance sheet of the state cannot handle or absorb the sort of commitments being made by both Mr Kirkup and [Nationals leader] Mia Davies,” Treasurer Ben Wyatt said.

“We are seeing both [leaders] … climbing a debt mountain with no plan to get down.

“I’m genuinely terrified of the prospect that these fiscal juvenile delinquents, that are the Liberal Party and National Party, somehow wrest control of the Treasury benches again.”

“Rest assured, we will outline to the public of Western Australia where we will get the revenue from to pay for our commitments,” Mr L’Estrange said.

“What the Labor Government is doing is scaremongering the people of Western Australia. Clearly, this is evidence of an arrogant government.”