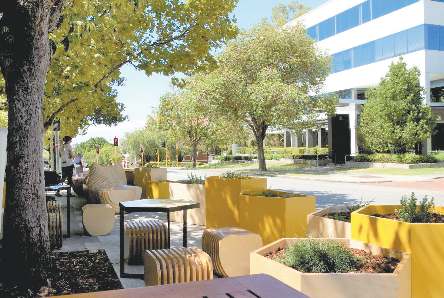 West Perth residents and businesses have welcomed a bee-friendly parklet in Colin Street.

Inspired by Bee Scene – a West Perth Local and WA Loves Nature partnership – the seating emulates natural beehives, while flowering plants have been used to support the bee population.

West Perth Bee Scene is aimed at not only conserving native bees, but activating the streets of West Perth. Following the successful trial
of parklets on Hampden Road, Nedlands and Royal Street, East Perth, the City of Perth and West Perth Local brought the native-themed parklet to fruition.

“Originally, I was a bit nervous about losing valuable parking space on Colin Street, but now that the parklet is built and installed, we couldn’t be happier,” West Perth Local chairperson Steve Wellard said.

“We are very thankful the City of Perth has created such a great piece of street art that blends in perfectly with our West Perth Bee Scene and the yoga space that it fronts.”

The parklet, on Colin Street between Hay and Mayfair streets, will provide West Perth residents and workers with buzzing amenity featuring an urban lounge, tables and pod seats as well as planter boxes providing screening from traffic.

Existing street trees will provide shade for those wanting to use the parklet.

Parklets have been used successfully around the world to enhance street amenity and create community vibrancy by offering interesting spaces in repurposed carpark bays.